Extract From Brian May’s Preface To The Book

What is this book about, and why did it have to be written ? Essentially, the title says it all. It’s about a hugely successful body of work, dismissed for 150 years by the Art world as “The Poor Man’s Picture Gallery”. Early Victorian stereo cards were – and often still are – generally dismissed by art critics as the poor relative of two-dimensional photography and paintings. This is the first attempt we know of to document how this happened, and to unearth the real roots of the relationship between paintings and stereo cards. We also discover some other sources of inspiration for stereo cards in the pages of Punch magazine and other Victorian media. 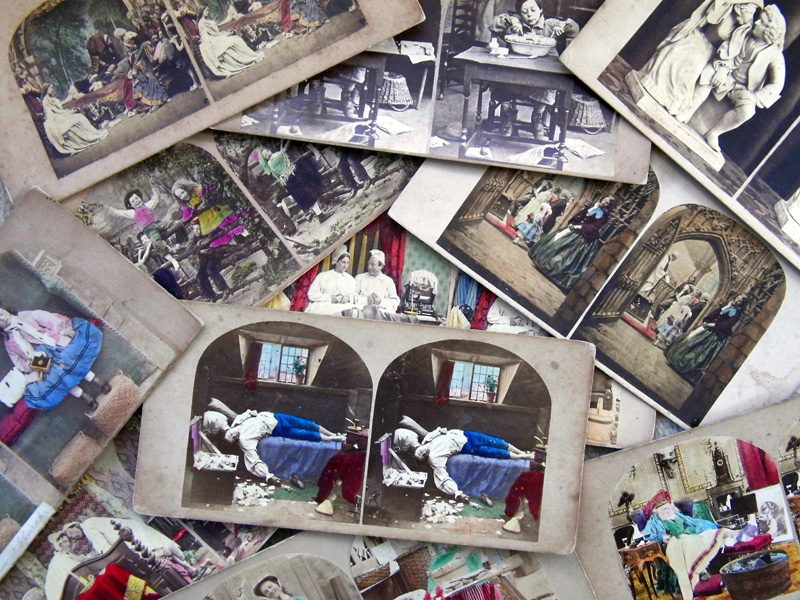 In this book we answer many questions about where the subject matter for stereo views came from, and explore the intimate connections between stereos and paintings, as well as other graphic artworks of the day in cartoons, sheet music covers, and those curious ornaments known as fairings. And inevitably we ask the question: is it time to reassess the importance of stereoscopy as an art form ?

Who were the small band of stereo photographers who created the wonderful ‘boom’ in stereoscopy in the middle of the 19th century ? In common with a small number of aficionados, I have been aware of their luminous work for more than 40 years. Just the sight of their names on the corner of a grubby piece of cardboard has often been enough to give all of us a charge of electricity up the spine. From the English side of the Channel, we find: Elliott, Silvester, Sedgfield, Laroche, Goodman, T. R. Williams, James Robinson, Reynolds, Michael Burr and others; and, often less well-identified, but none the less well-admired, from France: the Gaudin brothers, Lefort, Toby, and Anthony. Those of us who enjoy the open secret of the magic in these 3-D creations have long felt that we in some way know these artists. But, so little has actually been discovered about them as people that the ‘familiarity’ is an illusion. Throughout all these years, we have known almost nothing of why these photographers created these scenes – where the ideas and inspirations came from. Insights into these questions are what this book is all about.